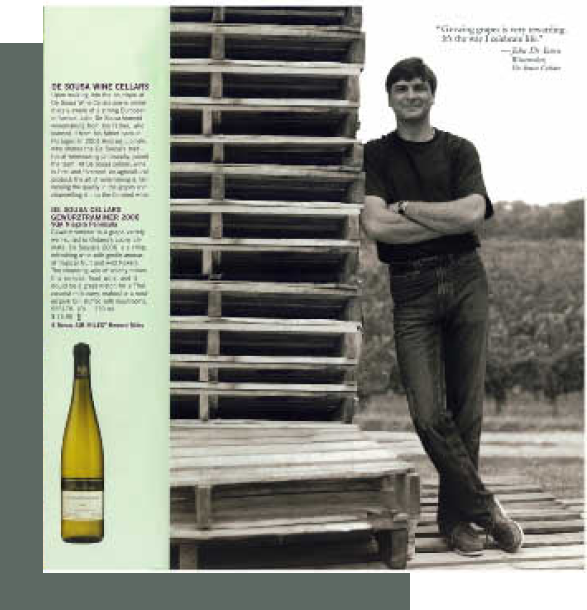 Located in the Niagara viticulture region of Ontario, De Sousa Vineyards is comprised of 40 acres of picturesque rolling vineyards of wine grapes. Grown with passion and a strong history in the Vinemount Ridge Appellation, our vineyard comes from humble beginnings.

As grape-growers, it is our aim to produce the highest quality grapes possible as “great wine starts on the vine”. Through our association with Diamond Estate Wines, Vieni Estates, Fielding Estate Wines, and Magnotta Wines, our fruit is transformed into exceptional wines to be shared with family and friends.

Our vineyard is located at the intersection of Quarry Road and Fly Road in Beamsville where we grow the following varieties.

The story of our vineyard begins with an entrepreneurial dream as John De Sousa Sr. journeyed from Sao Miguel, Portugal to Canada. With a strong will and passion, John De Sousa Sr. worked to build a variety of Portuguese-inspired businesses that the community embraced. Casa Das Prendas in 1969 and Lisbon by Night Restaurant in 1976. In 1979, he fulfilled his passion for wine, purchased land in the Niagara region with the dream of starting a winery that welcomed all to join in the celebration with good food and exceptional wine.

De Sousa Vineyards was purchased in 1979 and with help from fellow farmers and support from the Portuguese community, the vineyard grew into a place where hard work and determination lead to high-quality grapes. In 1988, the winery license was obtained and a fully operational winery, inspired by Portuguese traditions was born known as De Sousa Wines.

To honour the family’s Portuguese roots, John De Sousa Sr. built a facility replicating the famous architecture of the Azores. The original building contained large oak barrels for aging big reds and displayed an antique “Lagar” wine press from the family dating back to the 1820s. The building is still visible today however is now owned by the Town of Lincoln. Although no longer operating as a winery, it serves as a reminder of the De Sousa family history on the property.

In 1997, John De Sousa Sr. passed away at the young age of 58. John De Sousa Jr. continued his father’s legacy and furthered the growth of the business. In 1998, De Sousa Wines Toronto was opened in downtown Toronto with manufacturing facilities and a second retail store.

Good Wine Matters to Us

In 1988, Dois Amigos brand became an instant hit in Ontario LCBO stores, especially in the Portuguese community. Dois Amigos Red and White Blend was a flagship product that contributed to the winery’s success and truly represented the culture, friendship and community embodied in the experience of all who came to De Sousa Wines.

The year 2000 saw the launch of several premium wines such as Cabernet Franc, Merlot Reserve, Chardonnay, Riesling and Meritage. These wines achieved many prized awards over the years. One of De Sousa Wines’ most prized products has been the De Sousa port-style wine receiving silver at the prestigious International Wine and Cheese Show. It is produced from the only Touriga Nacional vines in Ontario and many travelled to the winery just to enjoy a glass.

Where We are Today

In 2008, De Sousa Winery, De Sousa Wines Toronto and part of the vineyard acreage, was acquired by Diamond Estates Wines & Spirits. The balance of 40 acres remained in the De Sousa family and is operated currently by John De Sousa Jr. as De Sousa Vineyards.

Today, John De Sousa Jr. remains very active in Diamond Estates Wine & Spirits as a shareholder and serves on the board. He is also very active in serving on various grape and wine industry boards.

John De Sousa Jr. built a home on the vineyard land originally purchased by his father and welcomes family, friends and past customers to stop by to enjoy a glass of wine on the vineyard.